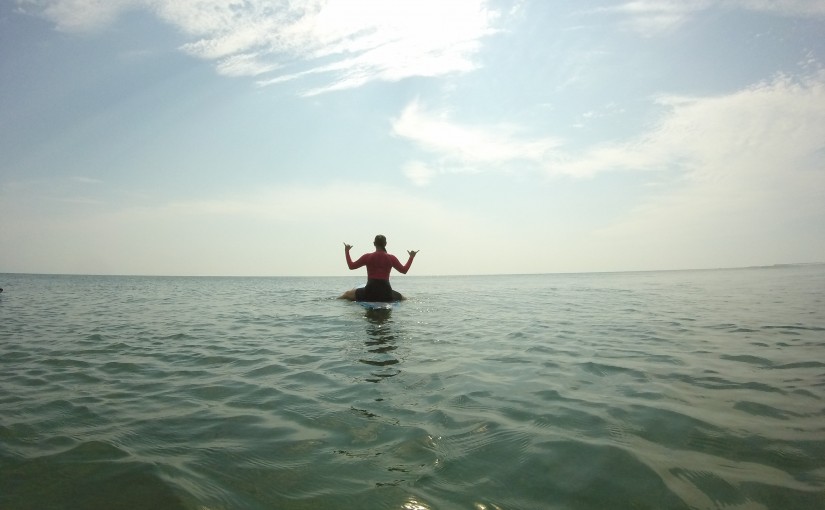 Vacation should include an adventure. An adventure that lets you escape from normal life. Siren Surf Camp with Farmdog Surf School in Nags Head, NC was the perfect addition to a family vacation and to having an Adventurous August.

I’ve never worn a wet suit. I felt like I was a sea mammal with my extra coating of blubber, I was so warm and it made me fearless of cold water and wipeouts. I could throw my body into the surf and I had this amazing protective layer to make sure I stayed warm and scratch free. It was a hot mess to get on though. Skinny jeans are nothing compared to the dance I did to get my wet suit on! 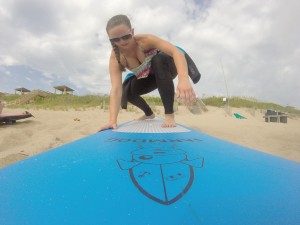 We met our instructors. The knowledgeable and teacher-esque, Skyla. She is also a ocean lifeguard so if was a very safe feeling knowing if something happened that she was already in the water with us.  Hannah was all surfer girl-cool in her trucker hat. Then Hailey who was super bubbly and I loved her energy! Each of them were in the surf with us, pushing us into waves, cheering us on and giving us tips and pointers before and after wipeouts! 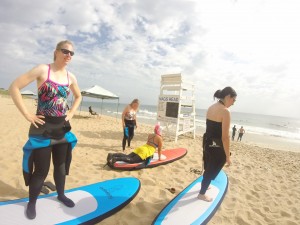 Each day of camp began with a picturesque yoga sequence facing the Atlantic. Bailey taught our class and was all warmed up because she taught a sunrise class right before ours. We all had a large piece of canvas that we shared. I expected sand to be flying around vigorously during any transition between a warrior and a downward dog; that was not the case at all. She had us do a number of yoga poses specifically for surfing. Hips and shoulder opening. Lots of child’s pose and a little bit of balance. Her voice was clear and likeable, always a good thing for a yoga teacher. There is no equivalent to being able to sit in the sand with your eyes closed, the morning sun on your face, the sound of waves smashing and hustling into and away from shore, and the clarity your mind is able to regain.

Getting zipped up, ankle strap attached and picking up your board lets your body know “get ready!” The water is shallow enough to wade out with your board but the waves are strong and our boards were easier to control while on them and paddling. Can you say shoulder workout!? I loved the challenge of paddling out into the water and digging in and picking up speed to catch a wave. Your focus shifts you are now in surfing survival mode; float and wait for a wave, scan the horizon for a set, pick your wave, paddle for your wave, catch a part of that wave, wipeout, tumble under the water, grab you leash and board, paddle back through waves out to the flat water and then catch your breath. 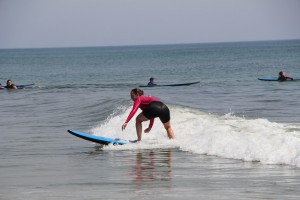 I wanted to catch as many waves as I possibly could which equaled a massive workout for me. Pretty sure my lungs were still being tossed around in the surf for most of the session! Standing up on your surfboard is like standing up on top of the world. It is exhilarating! All the ladies were cheering each other on, we were so excited when we caught waves and just as excited for the wipeouts. At the end of Siren Surf Camp I felt so accomplished and adventurous! It was the perfect addition to summer. For more information, check out www.farmdogsurfschool.com or follow Farmdog Surf School and PlayHardGetFit on Facebook, Instagram and Twitter.